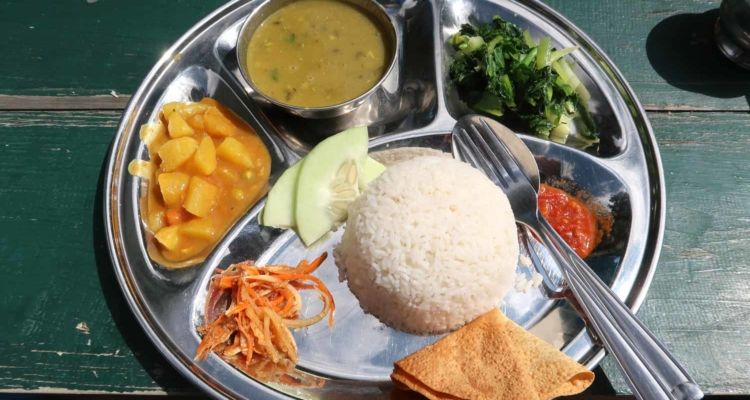 Dal Bhat is a dish which consists of lentil soup (dal) with rice (bhat) and either vegetable curry (tarkari) or steamed seasonal vegetables. Sometimes you can find an option with meat. It is eaten with pickles (achar) in a large brass plate(thal).

Momo is a type of South Asian dumpling, popular across the Indian subcontinent and the Himalayan regions of broader South Asia. They are usually filled with meat or steamed vegetables and encased in flour-based dough that is then steamed or fried. Momos are usually served with a side of chutney or a thick, soupy sauce made with tomatoes, chili peppers, and cilantro.

Consumed most regularly during Hindu festivals Tihar and Dashain, sel roti is a sweet, ring-shaped rice bread/doughnut. It is made of rice flour with addition of customized flavours. Locals dip it in yogurt or serve it with vegetables, but it’s also great on its own.

Dhindo is prepared by bringing hot water in a pan to boil and adding flour while stirring the mix. It’s traditionally prepared from buckwheat or millet but wheat/corn flour is common as well. Dhindo is often paired with gundruk (pickled leafy vegetables), yogurt, curried vegetables, or homemade butter.

Yomari are sweet fish-shaped steamed rice dumplings made by the Newari ethnic community, mainly associated with a festival in December held in their honor, Yomari Punhi. They’re made from homemade rice flour stuffed with jaggery, sesame paste or coconut fillings, and steamed. Why they’re shaped like fish is unknown, although special attention is paid to shaping the “tail,” as it is believed that the longer the tail the shorter the winter is going to be.

Chaku is made from concentrated sugarcane juice, jaggery, ghee, and nuts are cooked in a pot and then left to cool down. Once the mixture solidifies, it is hand pulled and then molded into bite-sized shapes. Chaku may be eaten separately, or it can also be used to fill Yomari.

Chatamari is a thin crepe made from eggs, rice flour, ginger and garlic paste. What differentiates chatamari from other bread is that it is not flipped while cooking. The crepe is topped with meat of your choice, eggs, green chili, cilantro and vegetables while cooking. It comes with different toppings.

Laphing (originally called liang fen) is a spicy cold mung bean noodle dish. Noodles are served with the soup that is an ensemble of soy sauce, chilli paste, vinegar, garlic, onions, Szechuan pepper and a dash of sesame oil. It is traditionally a summer food.

Samay baji is not so much a dish as a collection of dishes. Traditionally, samay baji meals were (and are) served at Newari festivals. It typically contains beaten rice, marinated and barbequed buffalo meat, spiced lentil pancakes, boiled eggs, soybean stirfried, potato/bamboo shoot curry, boiled black-eyed peas and pickle. It can be eaten as a simple lunch or as the starter.