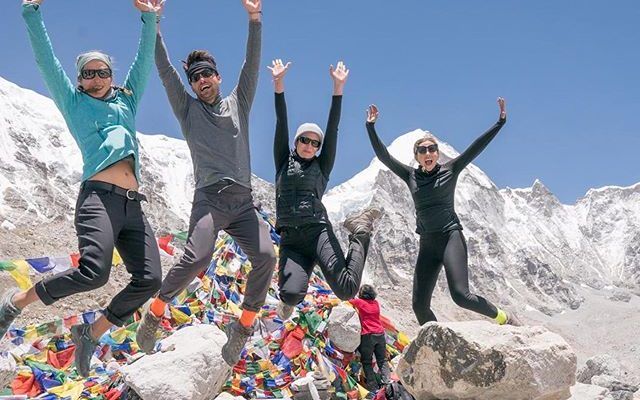 World class singer, songwriter and actress, Mandy Moore is on Everest Trek. Recently she gave her ear pleasing voice in the animated movie Ralph Breaks The Internet. Her upcoming movie Midway is under post production which is scheduled to launch on November 8 2019. Mandy has recorded 6 solo albums, gave voice in 26 movies, appeared on 22 television shows including How I Met Your Mother and The Simpsons, gave voice in 6 video games.

Nepal has always been in the bucket list for the trekkers and nature lovers. Here is what Mandy shared about her Everest Trek on the Instagram.

I went into this Everest viewing trek relatively blind. Not unprepared, mind you…but I wanted to venture forward into the unknown with an open mind and heart and as free of expectations as possible. I also knew we were in extraordinary hands with our friend/ @eddiebauer alpine guide and Everest extraordinaire @melissaarnot (she’s summited 6 times and guided the Basecamp trek between 35-40 times so this isn’t her first rodeo). Once we arrived in Kathmandu and had our de-brief about what the next 10 days of our life we’re going to look like, it became abundantly clear that this experience was going to be one of physical discomfort, personal challenge AND fundamental spiritual growth. Sign me up. We also decided as a group to refer to our trip as a Everest viewing trek incase our plans deviated from the original goal of making it to base camp, placing greater importance on the journey and not the destination.
In addition to living out this bucket list dream, being gently placed in this middle of this extraordinary country of Nepal and bearing witness to the customs and culture of the Sherpa people has been spellbinding. So much to take in, in every way.
3 days in, I’m writing this from 11,500 feet, tucked away in the terraced village of Namche (also known as the Sherpa center of the Khumbu Valley) as transparent clouds of mist seem to obscure our view of the hustle and bustle below and then just as quickly, glide away to reveal the towering peaks of Kongde Ri and Kwande La. We’ve been acclimatizing here for the past 2 days, taking on some day treks to help prepare our bodies and breath for the travels ahead. Not sure what awaits us on the road today but this group is in it all together (with all the snacks and milk tea one could ever want)! Stay tuned.

There is so much magic in these mountains. They represent adventure in the grandest form and in a language all their own.The idea of standing at the base of the world’s tallest peak with @eddiebauer, a brand that has been outfitting record-setting climbers since the beginning – from the first American ascent in 1963 (Jim Whittaker) to our guide @melissaarnot, the first American Woman to ascend and descend Everest without oxygen, is truly beyond my wildest imagination.
Traversing this terrain has its challenges. Breathing at altitude, for instance, is not easy. One of the greatest gifts/lessons that Melissa simultaneously bestowed on us during this trek was the fine art of pressure breathing. It makes all the difference as you climb higher. It’s essentially a big inhale and a sharp, forceful exhale, like you’re blowing out a candle across the room, to open up your lungs, allowing you to use more oxygen, etc… Besides hydration and staying nourished, breathing is THE vital key in the fight against altitude sickness. It’s also a major takeaway that I will be employing back to the real world whether I’m in the midst of a tough workout or a weird day. Mind blown.
So as we weaved around the Himalayas from 14,400ft-16,200ft-17,600ft: this particular technique was essential in propelling us forward.
Needless to say, this part of the world holds a very special place in @melissaarnot’s heart so her willingness to share it, as well as her time, knowledge and endless trove of stories were so appreciated by all of us lucky enough to walk alongside her this past week.
Her belief in our abilities to keep moving and ultimately make it to the base of the Mighty, Mighty Mt. Everest was so powerful. Spoiler alert: we made it!!! It’s impossible to be lucky enough to arrive at the foot of these mammoth peaks and not be attuned to the palpable energy of all of those who came before and lost their lives in these mountains. The wave of emotion: respect, reverence, appreciation….that washed over us as we took in the prayer flags and yellow domed tents of basecamp AND sat on the rocks regarding the chortens that dot the hillside of the Tukla Pass the day before, profoundly

There’s no way to distill this experience down to a few sentences. There’s no way to encapsulate what coursed through our veins and brains living in the mountains this past week. It will come in time. I think I’m slowly learning that I feel most like me when I’m outdoors. It’s couldn’t be any more outside my every day realm and yet there’s something entirely refreshing about being tasked with nothing more than breathing and slowly putting one foot in front of the other.
One thing I know for certain is that this trip was what it was thanks in large part to the company. Being able to adventure alongside those you love deeply (@streicherhair, @chaseweideman, @thejendaltonshow) and new friends alike (@starfire_reid, @julianapse, @tyler__reid, @sherpatseringdolker), is an absolute gamechanger. We shared everything: laughs, toilet paper, snacks, skincare, the silly songs that got stuck in our heads, milk tea, selfies, the “happy naturals”, etc…. all the makings of a quality trip to the most remarkable place any of us have ever been. I’m also left inspired by the collective perseverance this group had to help each other every step of the way and to watch as we all met this shared goal of reaching base camp together is something I’ll never forget. Thank you to our friends at @eddiebauer for making this happen!
And to the true MVP of this trek, @melissaarnot: thank you for sharing such a substantial piece of yourself and this second home of yours with us. It’s every bit as magical as you described: Your expertise, your stories, your wisdom, your belief in us…. set the tone for this entire experience…. The funny thing is, Melissa kept mentioning this idea of meditating and making goals while we were in the midst of the “pain cave”. It’s easy to daydream and make big plans when you’re down at sea level but it’s a much taller order to do it while in the grips of something truly difficult. Message received. I dug deep while in the midst of all of those pressure breaths and made a mental list of things that scared me but I was anxious to tackle. Now that I’m back on solid ground, I can’t wait to home and get to it. #whyihike#ebpartner

Her visit to Nepal will certainly make the country more popular. It’s the story of pride for all the Nepalese. We wish her all the beautiful surprises on the trek.