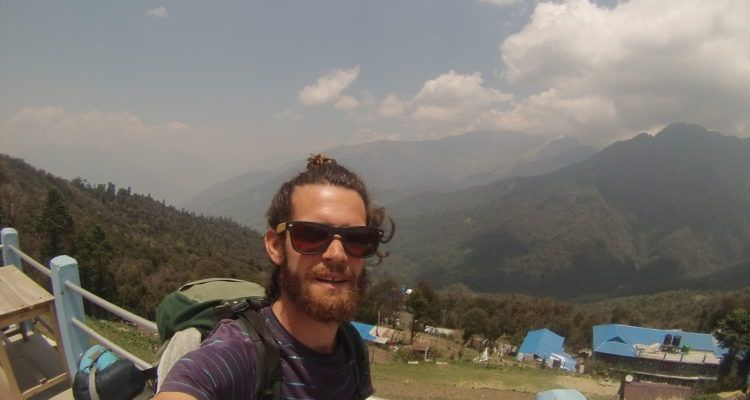 Rambert Julien from Bordeaux, France a famous town for Red Wine encountered with ktmguide while looking for a stationery shop in Newroad. To get him the best deal, we went to Sarwagya Stationery to buy school stationery for students in Dolakha where he would be volunteering for 2 weeks in a school.

Julien arrived in Nepal on 30th April, he got his Ncell sim card at the airport, took a taxi where the driver suggested him a good hotel. He booked his room online right away and got to his inn. He explored Kathmandu the other day and headed Pokhara to do Annapurna Base Camp Trek. Here is a video of Annapurna Base Camp from his Gopro.

After doing Annapurna Base Camp Trek he went for jungle Safari in Bardia National Park. He explored the dense forest of Bardiya, watched tiger in real for the first time, saw crocodiles and diverse species of flora and fauna. He spent 2 nights and 3 days in Bardiya and headed back to Lumbini. He told he really liked different styles of temples and monasteries built by several countries. He spend another 2 night and 3 days in a Korean monastery where they offer yoga, meditation and 3 meals a day at Rs. 500. From Lumbini he got back to Kathmandu to do Tamang Heritage Trail trek in Langtang National Park. Here is a video from Tsergo Ri he shared with ktmguide.

Julien said he liked Langtang National Park more than Annapurna Conservation Are on the basis of wilderness and adventure he had experienced. He told that the Langtang region is still unexploited, less visited and undisturbed by the road access.

He said he remembers Nepal as a beautiful country with kind and friendly people. He was suggested to do a trek in Nepal by his friend back in France who was born in Nepal. Julien suggests that it is better to trek alone so that you can meet new people and discover new culture. He says traveling alone gives you a very adventurous experience and the taste of wilderness.

At the end of his conversation with ktmguide he said “Listen to yourself, say yes to new beginnings, it is easy and friendly to live the world”