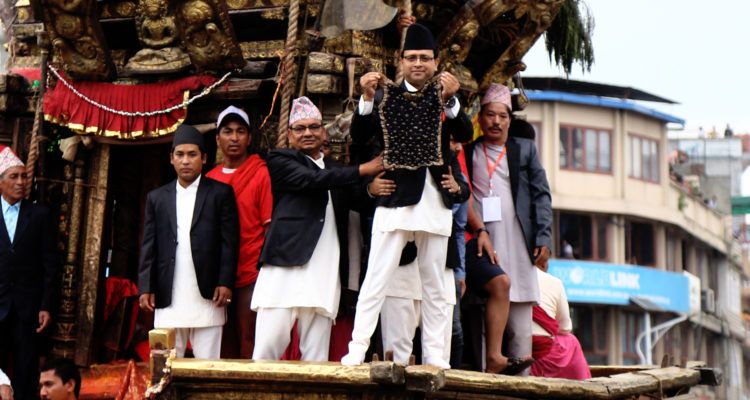 Bhoto Jatra festival was celebrated on 9 July with public holiday in Nepal. Today the bejewelled Bhoto or Vest was shown to the public, so that right owner of the Bhoto can claim it with the proof. This trend of Bhoto showing has been continued since 1350 AD.

Once upon a time in Taudha Lake of Kathmandu valley there lived a serpent king called Karkotak. One day his queen was sick, to cure her, the serpent king went to a farmer to get some medicine. The medicine healed the queen, so in happiness the serpent king offered him bejeweled vest. The farmer used to wore it on special occasions. There also lived a ghost in the town who wanted to have that precious vest, so the ghost stole it from the farmer. The farmer waited for the festival of Rato Machindranath to begin thinking that he will find his vest during the Jatra, as everyone including angels and demons would join the occasion. The day came and he saw the ghost wearing his vest. They started fighting for the vest which grabbed King Gunkampdev’s attention. To solve the dispute the King said the one who can bring the proof of rightful ownership can take the Bhoto, until then he handed the Bhoto to the priest of the Chariot of Rato Machindranath.

The farmer went to the serpent king and requested him to come next day and help him prove the ownership of Bhoto. The serpent king agreed but didn’t showed up the next day. The farmer couldn’t prove his ownership so the king told priest to show the Bhoto every year after completing a month long Rato Machindranath Jatra so that right owner can claim the Bhoto with the proof.

The tradition is being continued till date but no one until now came with the proof to claim the bejeweled vest.