Beautiful Thailand – Travel and Discover the most adventures destination 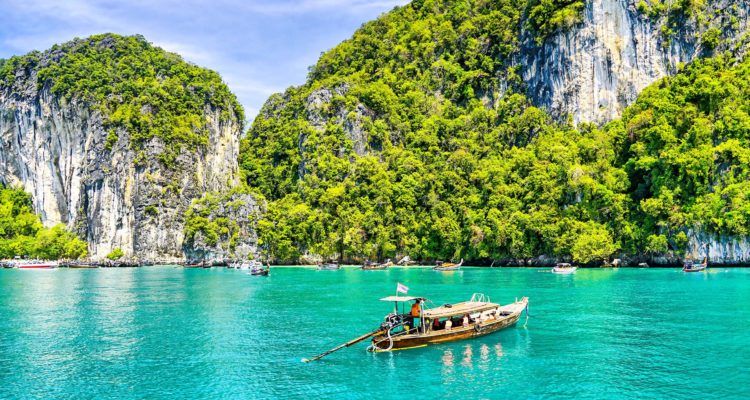 Thailand is a Southeast Asian country known for tropical beaches, opulent royal palaces, ancient ruins and ornate temples displaying figures of Buddha. The country is one of the most popular destinations for its tourist-friendly environment. One can have the opportunity to discover new places, have an adventurous journey, make incredible plans and enjoy the fullest. Thailand houses a population of about 66,720,153, as of 2013. The population of the country is largely rural with the highest density in the rice-growing belts of the country. As of 2010, Thailand had an urban population of 45.7%. The urban population is mainly centered around the Bangkok Metropolitan Area.  It is also famous for its Thai cuisine which expresses aspects of Thai culture: it is generous, warm, refreshing and relaxed. Thai dishes rely on fresh, local ingredients, pungent lemongrass, searing chilies, and plump seafood. A varied national menu is built around the four fundamental flavors: spicy, sweet, salty and sour.

Bangkok is also known as the City of Angels, where immortal divinity resides. Beautiful castles endowed with rich culture and friendly people. It occupies almost 1000 square kilometers and is densely populated with around 15,000,000 people. A city that contains over 500 high rise buildings. Ever since the country abolished the absolute monarchy and adopted constitutional rule they have grown rapidly. The city has become a center of artistic beauty, where fashion is appreciated and art flourishes. The appreciation for art has made their city very vibrant and pleasing for the eye. It is very overcrowded and full of pollution because of its high population, lots of vehicles are used and this exerts carbon dioxide and pollutes the atmosphere.

Nonthaburi is the second-largest city in Thailand with a population of around 270,000 people. Nonthaburi is a city of the tropical climate. It is pleasantly warm and only has a rainy season apart from the warm climate. Their perfect climate makes it perfect to visit at any time of the year. The city has beautiful sites with great shopping malls such as Central Plaza Rattanathibet with plenty of cultural sites such as Wat Khemaphirataram Rajaworawiharn which has relics of Buddha. Up until the 19th century, it was nothing but a fishing village, and since then till now it has constantly been progressing.

Nakhon Ratchasima or Korat Thailand is the most prosperous province of the East. Its richness of culture is very interesting since it has its own folk song called ‘Pleng Korat.’ Nakhon Ratchasima is also important to Thai history. Traditionally the city’s economy has been dependant on agriculture were plenty of rice, tropical, and sugar is produced and then exported throughout the world, however recently they have been making plenty of money through other means such as retail. By 2018 it is said that the city will have one million square meters of retail space as more and more store chains invest and have invested in expansive outlets within this city.  All ranges of tourist attractions are available here that you need to take quite some time to visit all of them. Locating a few hours away from Bangkok with easy transportation the province is very popular for tourists, especially in Khao Yai National Park.