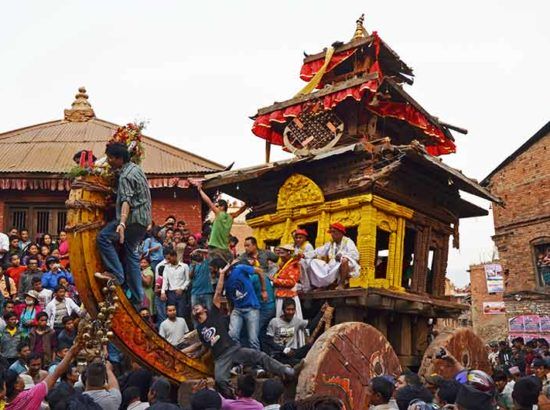 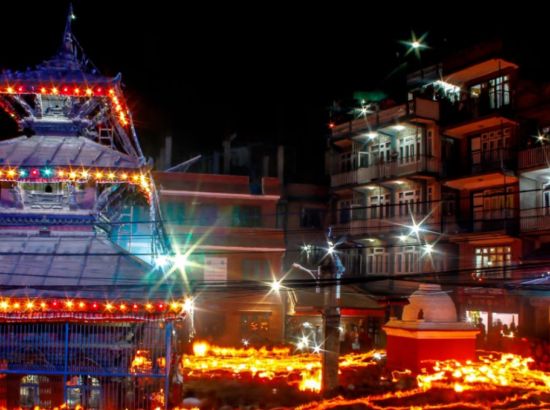 Siddhikali Temple is a Hindu temple located in Thimi, Nepal. The two storeys roofed temple is dedicated to Lord Kali, Shiva and Ganesh. It is located in Inayekwo, in the north west of Thimi. The temple is also known as Inayekwo Dyo in Nepal Bhasa language. Siddhikali Temple is also known as Chamunda, one of the goddess of Astamatrika. The majestically impressive Siddhikali temple has numbers of Pataa streaming down the front. There’s a Satah (rest-house) opposite to temple and multiple Falcha (Inns) and several smaller shrines (Shiva Temple, Saraswoti Temple, Bhimsen Temple, Basundhara Temple, Sahsrabhuj Lokeshwor Temple, Buddha Chaitya) to the rear and nearby and several stone taps around the place. The artwork around the Siddhikali temple is fantastic and worth a close inspection.

Siddhikali Temple or Siddhi Kali Temple is a cultural and religious place where mainly Biska Jatra (Bisket Jatra) of Thimi is celebrated on every 1st of Baisakh month which is also known as Siddhikali Jatra. Seven Palanquins of different god (Siddhikali, Koshi Inaye Ganesh, Bishwo Binayak, Korki Inaye Ganesh, Gaancha Inaye Ganesh, Raj Ganesh and Shiwa Ganesh) are gathered together in temple premises to celebrate a big Biska Jatra festival. The Nitya Bhajan is performed everyday in the morning and every Saturday night and also Ramayan Bhajan performed every Friday mid-day in Siddhikali Bhawani Temple. Inside the temple goddess Siddhikali and Lord Ganesh in the middle part can be easily recognized. Beside that Bhairav and Navadurga deities are also exists inside the temple. In Chapacho Thimi, there is Siddhikali Dyo Chhen located which means House of God where we can worship goddess Siddhikali here too. The Jatra of goddess Siddhikali starts from here and ends to here. Twice in a year (Baisakh 1 and Yenya Punhi) goddess siddhikali takes to Siddhikali temple from Dyo chhen to observe the Jatra known as Dyo Bwekegu Jatra. The curious and mysteries of goddess Siddhikali is that statue of Lord Ganesh is kept as goddess Siddhikali on Dyo Chhen and same idol is kept on the chariot during Biska Jatra (Bisket Jatra) (Baisakh 1st and 2nd) and Yenya Punhi Siddhikali Jatra.