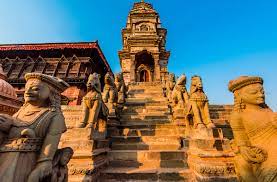 Siddhi Lakshmi Temple is one of three shikara-style temples built in Bhaktapur square, and one of only two surviving examples (the third, the Silumahadeva, was destroyed in the 1934 earthquake, while the second, the Vatsala Devi, still stands). It honors Siddhi Lakshmi, a patron deity of the Malla Kings. The goddess was believed to have the power to drive away evil spirits and negative forces, and in this sense, served as a protector. As she represents one of the manifestations of the wrathful goddess Durga, various bas-reliefs of Durga are mounted above the temple’s entrance and on its sides.