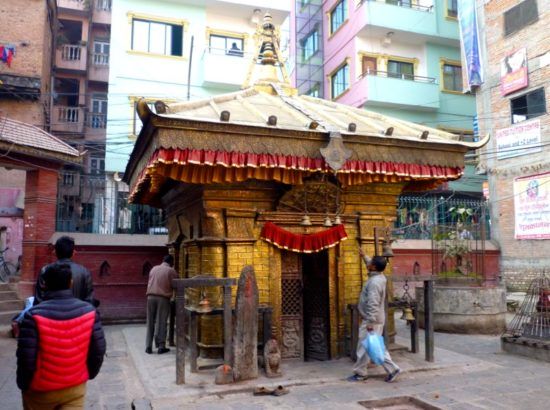 One of the most popular temples of the goddess Kali in Nepal, the temple of Raktakali is situated on the way to Naradevi. Raktakali is also called KulabhuluAjima. Kali is one of the most dangerous forms of goddess Durga who looks terrifying with the skull garland around her neck, her skirt made of hands and her long tongue red with blood of the demons.

The area that the temple covers is big and has various other statues of Maa Shakti in her different forms although the main temple is not as big. The temple is preserved by the Jyapu community. The devotees are allowed to build and erect a statue of the goddess in the temple if they please. The temple has two large gates and also contains stupa of Lord Buddha.

The looks of the goddess itself is capable of terrifying the demons. Goddess Raktakali is the mother who resides with the immaterial spirits. Her character is similar to that of goddess Kali’s and she is considered as a warrior goddess. She is considered as the female energy whose has Bhairav as her male form of god.