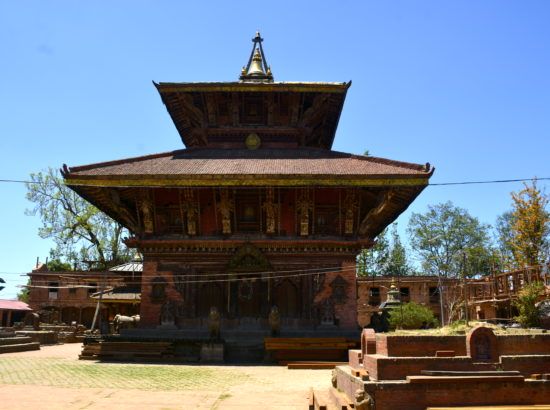 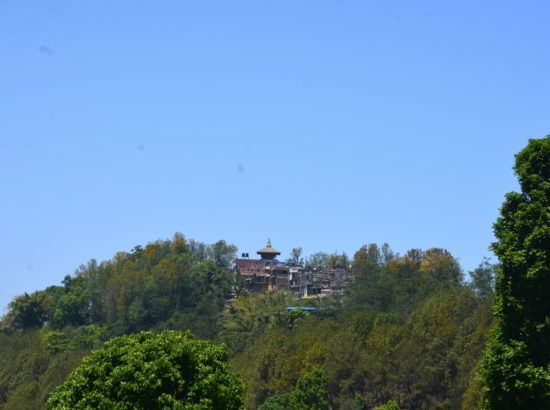 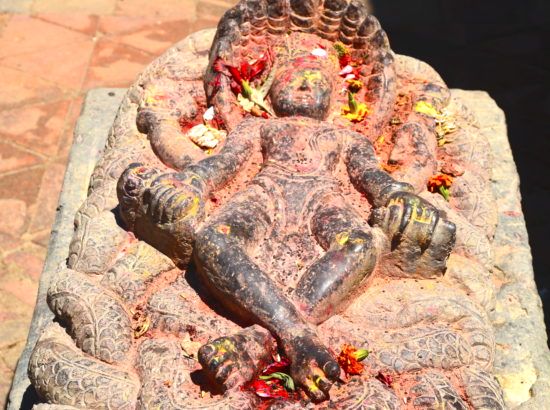 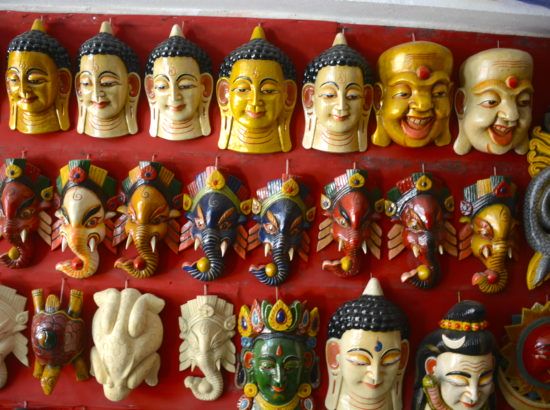 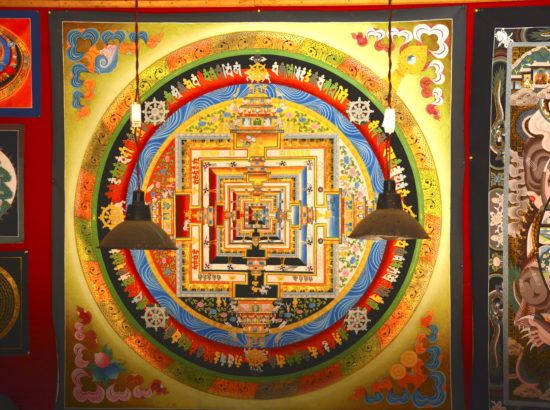 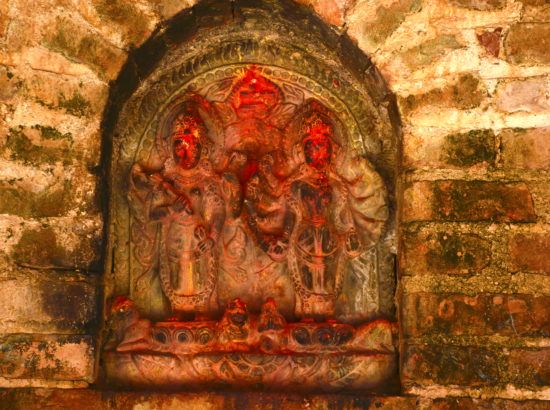 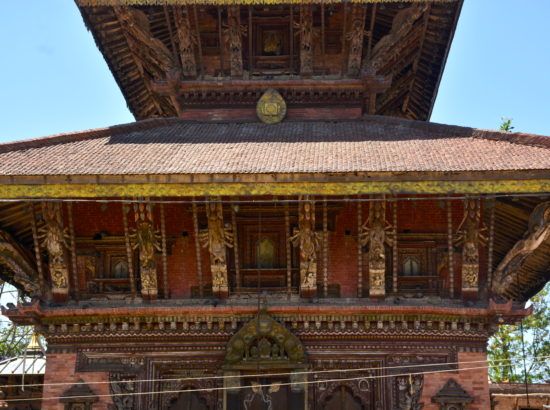 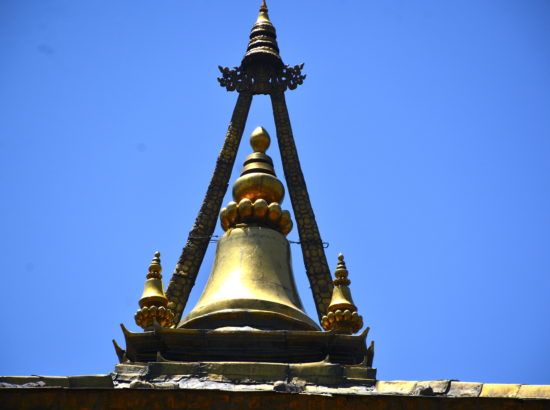 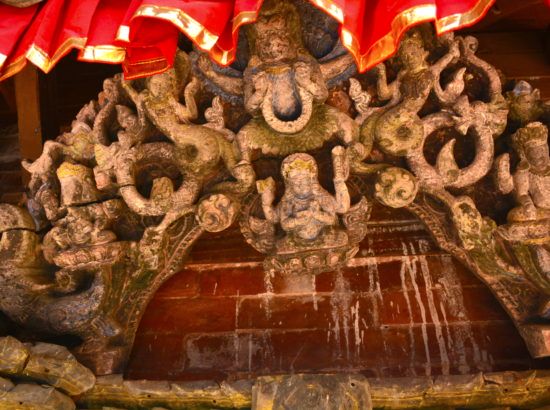 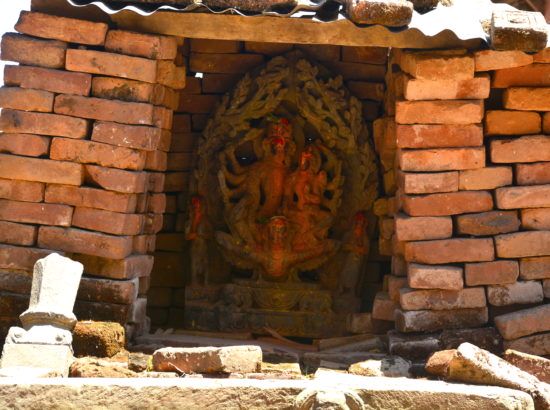 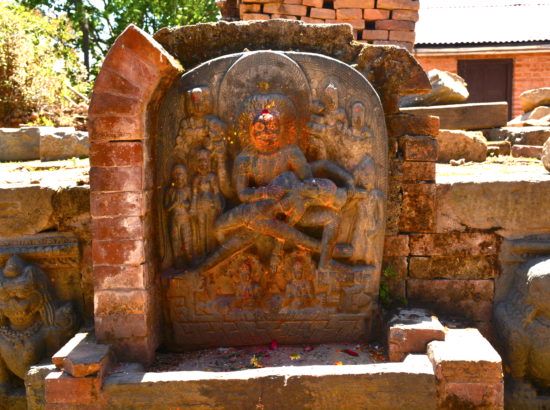 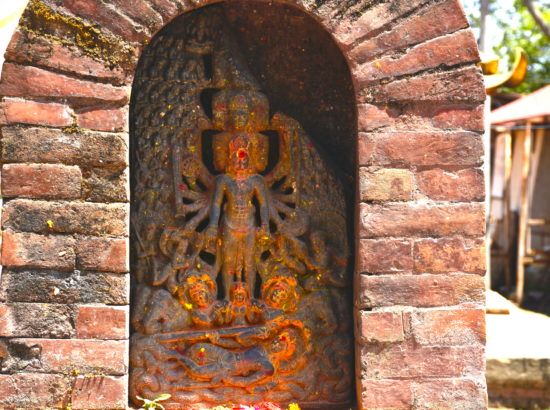 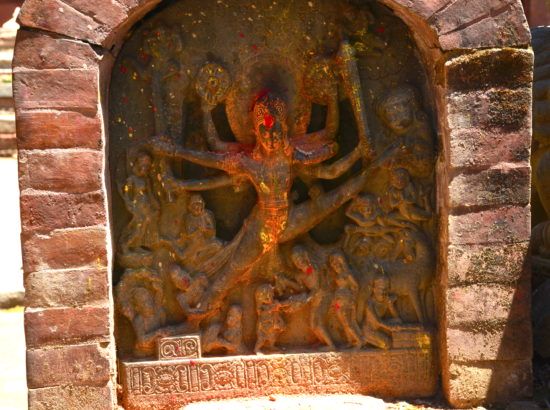 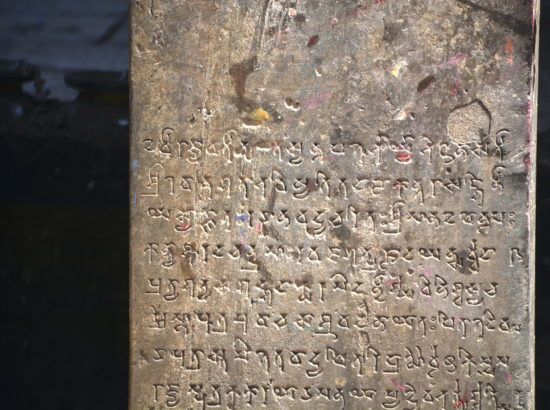 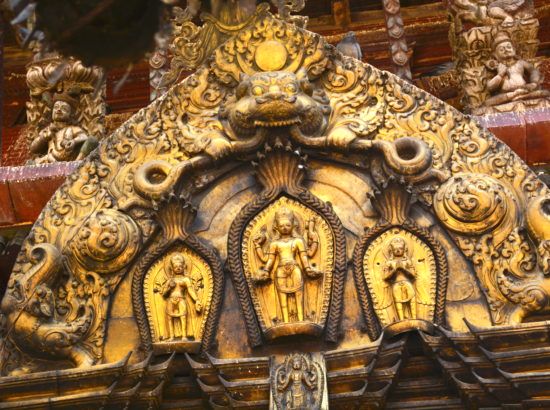 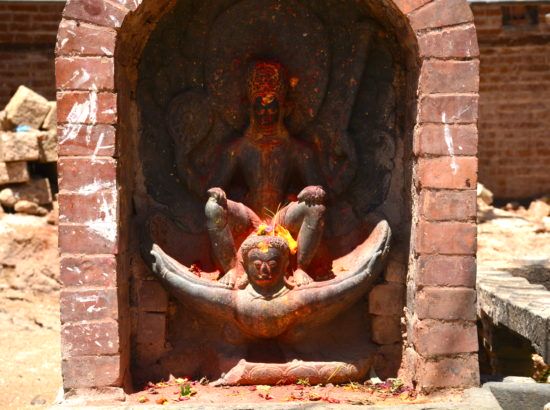 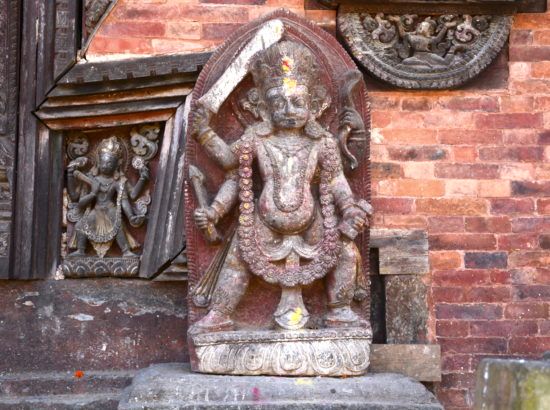 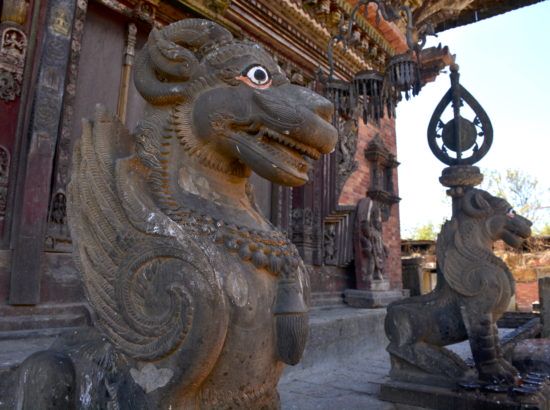 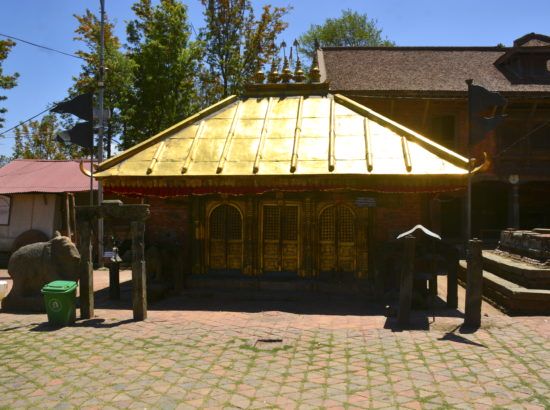 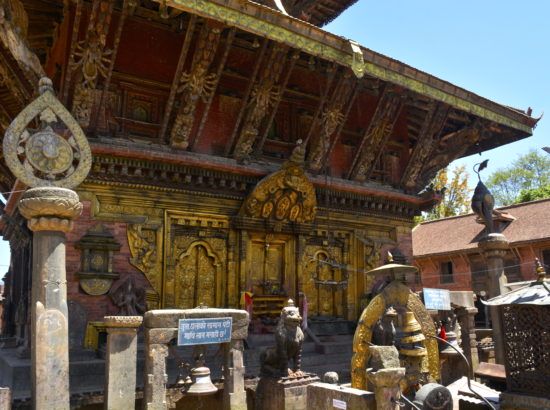 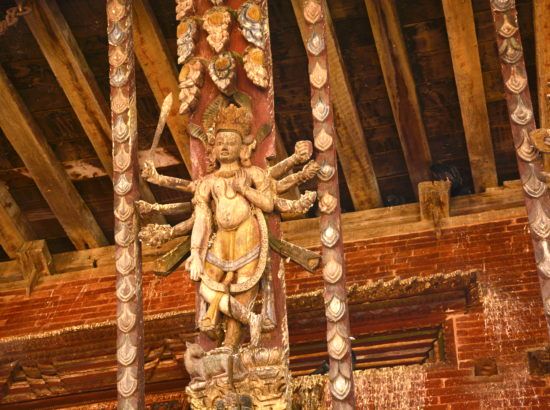 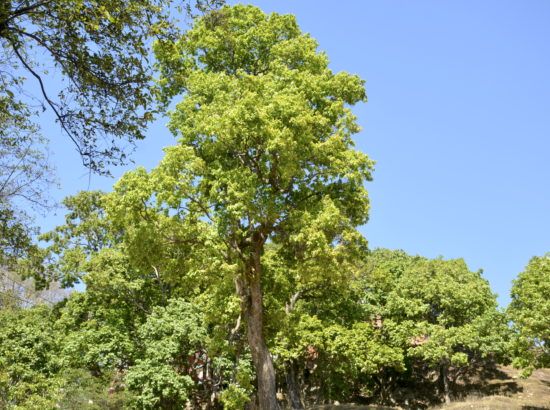 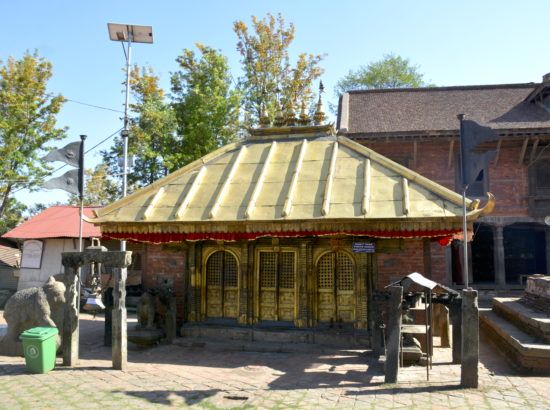 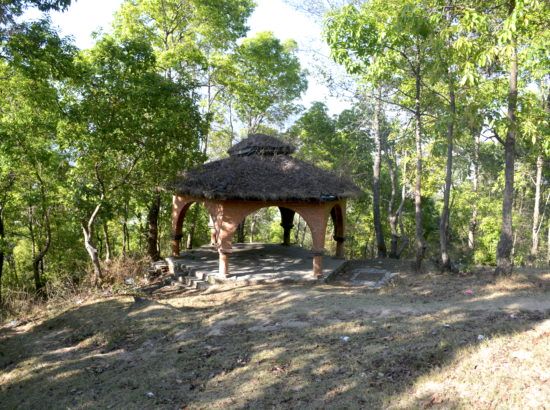 Walking up to the main temple, one can see an ancient stone tap still being used by the local people. On the sideways are souvenir shops with authentic wooden masks and Thangka paintings. The magnificence of Changunarayan can be felt as soon as you encounter a beautiful rest house at the entrance decorated with stone sculptures of Vishnu and Laxmi. The temple complex premises, two-storied pagoda style temple of Lord Vishnu built by the king Haridatta Barma in the 4th century.

The temple is beautifully decorated with wood and metal carvings with colorful struts reflecting the 10 incarnations of Lord Vishnu. The temple features a golden gate with beautiful carvings of Vishnu, Laxmi, and Garuda. The sculpture of Vishnu inside the main sanctum can only be seen by the priests of the temple. The colorful exterior of the temple is carved with various Hindu deities and mythical creatures. Buddhist pilgrims also visit Changunarayan to worship the main deity as Hariharihari Vahana Lokeshvara.

The foundation of this temple is related to a story where Lord Vishnu killed a Brahmand, he was then cursed to live as a Champak tree. When the Brahmand named Sudarshan found that a strange boy always came out from the Champak tree and drank all the milk of his cow, he cut down the Champak tree, from the tree blood spilled and lord Vishnu appeared. Lord Vishnu blessed Sudarshan for freeing himself from the curse. Since then this place has been the major site for worshiping lord Vishnu and building amazing art and crafts in his name throughout the centuries.

The temple complex is surrounded by rest houses with scattered stone sculptures and temples. The premise contains the oldest stone inscription erected by king Mandev in 464 AD. A statue of Vishnu’s vehicle Garuda is seen in front of the temple. On the side of Garuda is a 17th-century statue of King Bhupatindra Malla with queen Bhuwan Laxmi. Stone monoliths in front of the temple are clamped with Sankha and Chakra that are supported by stone turtles. The temple is guarded by the sculptures of griffons on three sides and elephants on the other.

9th-century sculpture of Sridhar Vishnu, the 16th-century sculpture of Vaikuntha Vishnu, and many other marvelous sculptures depicting Shri Vishnu in many manifestations can be discovered in Changunarayan. A small two-storied Kileshwar Mahadev temple with a beautifully crafted golden gate and struts with erotic wood carvings can be seen in front of the temple.  A temple of Chinnamasta Devi who beheaded herself to fed the Dakini and Varnini can be seen on the left of the main entrance. In tantric Buddhism Chhinnamasta is worshiped as Chinnamunda. A mysterious unfinished stone sculpture of an elephant can be seen in front of the Chhinnamasta temple.

The surrounding area of the temple is covered by the forest of Salla and Champak trees with numerous stone artifacts scattered around. There are picnic spots in the forest which make Changunarayan an interesting day trip to go with friends and family.

Changunarayan world heritage site has preserved the most interesting wood and metal crafts that are yet to be discovered completely.