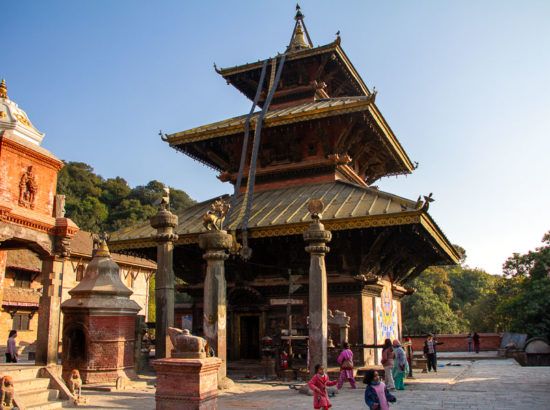 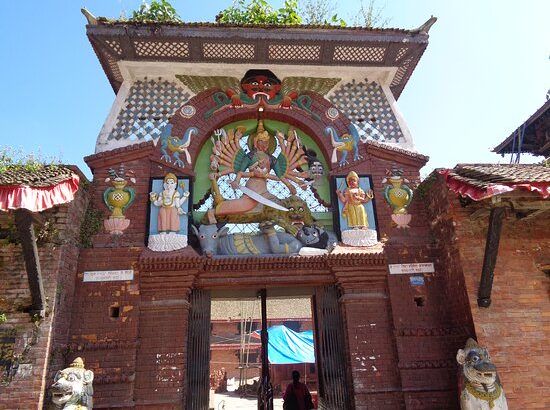 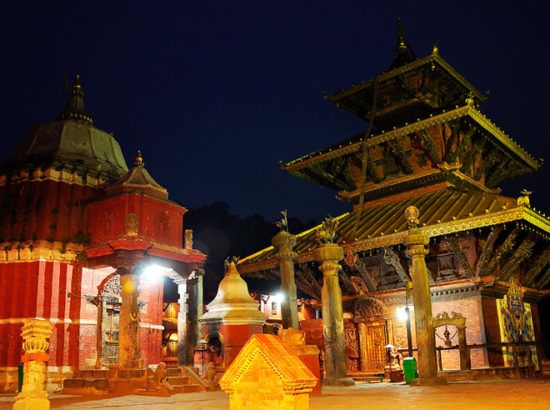 Chandeshwori Temple is located in Banepa, about 25 kilometers east by road from central Kathmandu. The site’s primary attraction is its lofty three-tiered mandir, last rebuilt in the 17th century. It enshrines Chandeshwori, one of the Nine Durgas (Navadurgas) and a goddess cognate with the Tibetan deity Ekajati. Legend credits Chandeshwori as the slayer of the demon Chanda, for which she is widely regarded throughout Nepal. In ages past, Chanda ran amok after being granted a blessing by Shiva that shielded him from death, making him immune to attacks from both gods and men. With the gods powerless to stop him, Brahma counseled that Chandeshwori should be sought out in the distant Raktachandana forest near Banepa. When the gods came upon her, she agreed to help, but the panic-stricken gods transformed themselves into birds and flew away at the first sign of Chanda’s approach. Chandeshwori was left to engage Chanda alone, fighting a long and destructive battle that laid waste to the landscape, leaving behind a rocky moonscape whose traces can still be found around Banepa today. However, in time, Chandeshwori prevailed, killing Chanda with a stab from her trident. From his body, a lingam spontaneously emerged, erupting through his belly. Today, the lingam can still be found within the small brick temple to the north of the Chandeshwori mandir (rebuilt after the April 2015 earthquake). In honor of the goddess, her pagoda was established nearby. She is honored each year at Baisakh-Purnima, a date also honoring the birth, enlightenment, and death of the historical Buddha, Gautama.