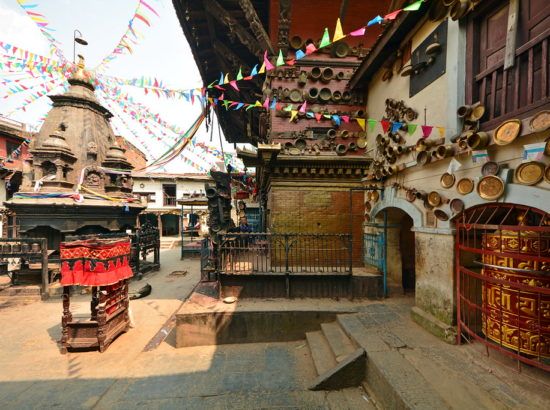 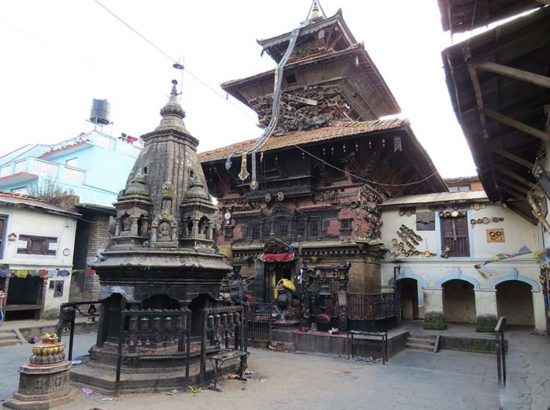 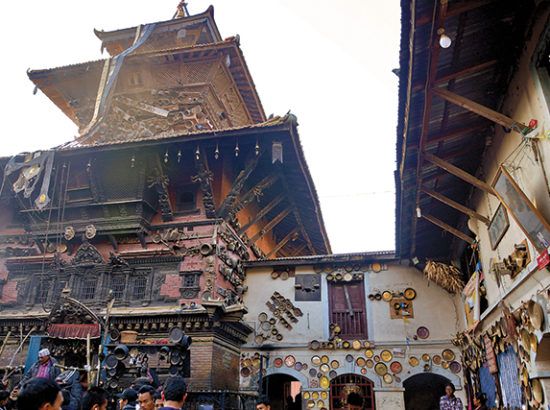 Adinath Lokeshwar Mandir is a temple sacred to Hindus and Buddhists in the village of Chobar, outside Kathmandu in Nepal. The temple is dedicated to Anandadi Lokeshwar, one of four principal Bodhisattvas honored as Lokeshwars in the Kathmandu Valley (or Adinath for Nepali speakers, who regard this deity as one of four Matsyendranaths). It was built in the 15th century, then rebuilt in 1640. Tourists often refer to this as the “pots and pans” temple, due to all of the domestic implements affixed to its walls. Accounts for this custom vary, but all relate to the welfare of the deceased in the afterlife.

There are various legends connected to the deity. The story begins with the coming of Manjusri to the valley to drain the lake and make the valley habitable. Manjusri, who has taken the name of Manjudeva for his sojourn, comes to the valley and cuts the rim of the hills near a low hill called Kacchapala Giri, the hill of Chobar. The deity inhabiting the hill is angry because he is being cut by Manjudeva, but Manju retorts that he should be glad as once the lake has been drained away, the Valley will become the seat of a great civilization and one day Sri Tin Lokeshvara will come to take up residence on the hill of Chobar. Many eons later, when the Valley had become a center of civilization and was being ruled by a king called Dharmakara, Manjusri decided to return to the valley as Manjudeva to pay a visit to Sri Tin Jyotirupa Swoyambhu. He brought with him Kasyapa Tathagata. The two of them decided to set up a Vihara in the Valley to teach and advise the people. They set up a vihara called Pim Baha, located in a place thereafter called Manjupattana. In order that the proper worship of himself and Kasyapa Tathagata might be insured he selected a certain acharya, instructed him in the ritual and appointed him and his descendants as official deo palas (priestly attendant, dyah pālā in Newa). Manjusri became known to the people there as Adinath.